rom the States, at the Planetarium in London where I was living 25 years ago. Bill asked me out for dinner a couple of days later and during that evening we discussed a few subjects that led to us talking about past life therapy. Bill told me that he had been attending fortnightly sessions for about six years and that he had travelled so far back that he had gone into the future.

That night I had my first past life experience. I got comfortable in a chair, closed my eyes and shortly after, with Bill’s guidance, I had arrived into a past life. My first impression was that it was night, and I was walking down a cobblestone laneway and the buildings had small windows with candlelight shining behind them. Suddenly, I was overwhelmed with small creatures running all over and around me, they were rats.

I felt very uncomfortable and must have been wiggling about and moaning as I sat there. Bill quickly instructed me in a way as to pull me out of that experience as I then found myself in the countryside looking at a small cottage with a thatched roof. It was still night time and I could see the glow of candlelight in the windows as I approached. 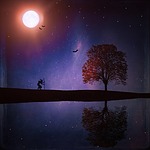 I walked inside and noticed a man sitting beside an open fire. The man got up when he saw me and walked over and picked me up. It was then that I realised that I was a child as I felt so small in his arms. It was then that the memory of that life came flooding back. I started to cry and I told him “the cats are gone, they’re all gone”, and I remembered that my mother had died when she had been judged as a witch.

When I came out of the regression, Bill and I discussed my experience. Bill said “did you know that during the old English witch hunts, they killed all the cats as they feared they were the witches ‘familiars’ which caused the rat population to explode which in turn caused the Bubonic plague.”

I did not know of this historical fact and it served to prove to myself that my experience was indeed very real. Even after 25 years, I can still close my eyes and see in my mind’s eye the details of my vision.

Exploring our past lives does really help us to understand ourselves. I have a deep love for animals, especially cats and as a child I would tell my mother that “I want to go back to London” even though we had never been there in this lifetime. If you have a passion for certain type of food, are drawn to a certain type of career, or a deep interest in a historical event, these could be clues to where you have been before. Past life therapy is indeed an enriching experience.

Comments (2) on "What An Awesome Experience"